Squeezed between the Royal Mile, the Scottish Parliament and the Palace of Holyroodhouse, the area of Dumbiedykes is bang in the middle of an Edinburgh tourist hotspot.

Visitors to the city, however, probably don’t look twice at the small housing scheme – unless they happened to glance down on it from Arthur’s Seat, wondering why there are hulking 1960s flats stuck in the middle of an historic city.

Boasting 640 households, the area is dogged by poverty, unemployment, drug use and ill health, but while it may not be on the tourist map it is on the radar of one local charity.

Comas, based across the road from the estate, is an Edinburgh charity which specialises in community development and social innovation.

It has already had success with its Serenity Café – a community hub for people in recovery from addiction, but its latest project aims to be wider reaching. 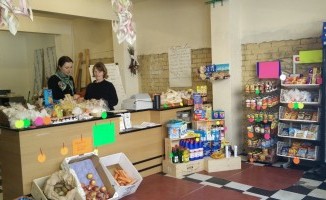 We’ve worked out you could get all the ingredients to make tea for your family for £1.20 and you would achieve that because you wouldn’t have to buy too much stuff

Twenty More wants to make every household in Dumbiedykes £20 a week better off.

That £20, says Ruth Campbell, Comas chief executive, is worth over £1,000 a year and on a weekly basis could be the difference between being able to afford food for dinner and electricity.

How a household becomes £20 better off depends on the household itself.

Comas’ staff are going out and meeting as many residents as they can to offer help. This could be helping people find out what benefits they are entitled to or it could be saving people cash by offering them help with a gambling, smoking or other addictions.

The £20 could also be saved through debt management and budgeting advice, or by cutting down on fuel bills by being signed up to national schemes for home insulation.

“For most people so far it has been about getting them on to the benefits they are entitled to.

“For example, one woman who was looking after her granddaughter wasn’t getting kinship care allowance worth £80 per week.

“We are taking a really proactive approach, knocking on people’s doors and introducing ourselves to the community.

“It is the only way we will get full coverage so that’s what we are doing.”

Another approach taken by Comas is the introduction of a community shop.

Opened a month ago and based in the centre of the estate, the Dumbiedykes Express is a way for households to save money on their weekly shop by buying food and other household grocery items at a significant discount on the price in local supermarkets. 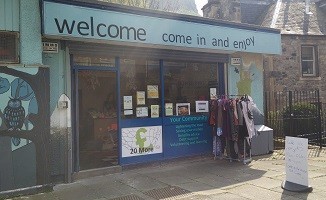 To do this the charity buys in bulk from a cash and carry and splits the items into more practical sizes and sells them on at the divided cost price.

For example a 10kg bag of rice costing £2 could be split into 20 500g bags costing 10p each – meaning people don’t need to buy more than they need in order to get the saving of buying in bulk.

Opened four days a week, the shop has received a Scottish Government people and communities grant to train volunteers.

Comas has also received funding for the Twenty More project from the Clore Prize Fund, which helps pay rent for the shop and allowed it to spend £500 on initial stock.

Ruth continued: “I think a lot of people when talking about poverty don’t realise that cashflow is important. You’ve got to get from one payment to the next and you can’t afford to bulk buy at cheaper prices because there is absolutely no point in having tonnes of tins of beans but no toilet roll.

“We decided we needed to give people access to cheaper prices but also to split things up into units that would do people a fortnight.”

Packs of food items in the shop cost pennies not pounds and customers are able to go in and buy a single egg for just 10p rather than a whole box of six.

“It’s quite simple, it’s not complicated,” says Ruth. “You do have to make sure you buy the right stuff and stuff that you can sell cheaper than supermarkets as all supermarkets have loss leaders.

“We’ve worked out you could get all the ingredients to make tea for your family for £1.20 and you would achieve that because you wouldn’t have to buy too much stuff. You could buy just enough pasta and just enough sauce and vegetables. My cupboard is full of spices that I’ve opened for one recipe but if you’re poor you can’t afford to do that.”

What Ruth and Comas, which commits 1.5 members of staff to Twenty More, are trying to do through the shop and other initiatives is to provide immediate but lasting solutions to alleviate the effects of poverty in the area.

It won’t change a benefits system that Ruth insists badly needs fixed, but it will, she says, provide people with a “here and now” solution rather than parking people and their needs until something is changed.

“£20 a week was a figure we felt was achievable but was also an amount that was tangible and could make a difference to somebody’s life,” she continued.

“When you think of it in terms of the difference that makes in your food shop or your ability to buy your children shoes when they grow out of them or for someone who has retired being able to put an extra heater on in their house – it is significant.”

Check out the savings at Dumbiedykes Express