Ask 1,000 people what OAP stands for and 999 of them would probably reply “old age pensioner”. However, if you had put the same question to the 300 delegates leaving last week’s Age Scotland conference they might have had a different answer: “Older And Positive!”

The conference, at Perth Concert Hall, was Age Scotland’s first as an organisation since it was formed in 2009 following the merger of Age Concern and Help the Aged to create the biggest older people’s charity in the UK.

But there was no detailed statistical analysis of how the fledgling charity has performed in its formative years, nor was there a ramming of future strategy down the throats of the gathered representatives of its members. 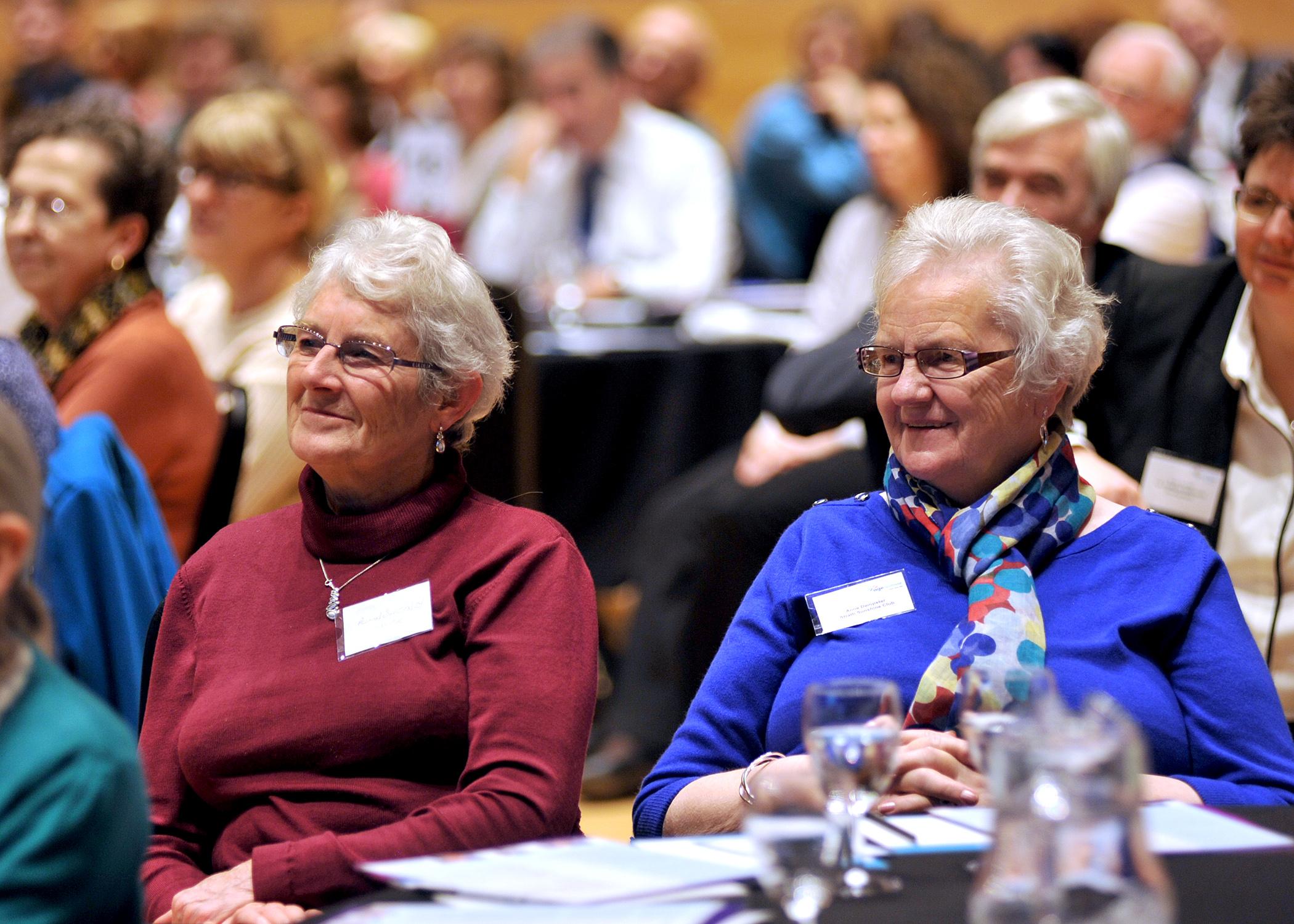 Instead, there was something arguably more useful, a day filled with entertaining and motivational speakers to encourage the largely older audience to be positive about their age.

Acting as role models for the benefits of an active lifestyle were Scotland’s national poet 66-year-old Liz Lochhead and former footballer and Lord Provost of Fife Jim Leishman, 61.

Lochhead introduced the conference to her alter ego Dirty Diva and explained why her outlook on life is that her glass is now half empty – but she doesn’t care. 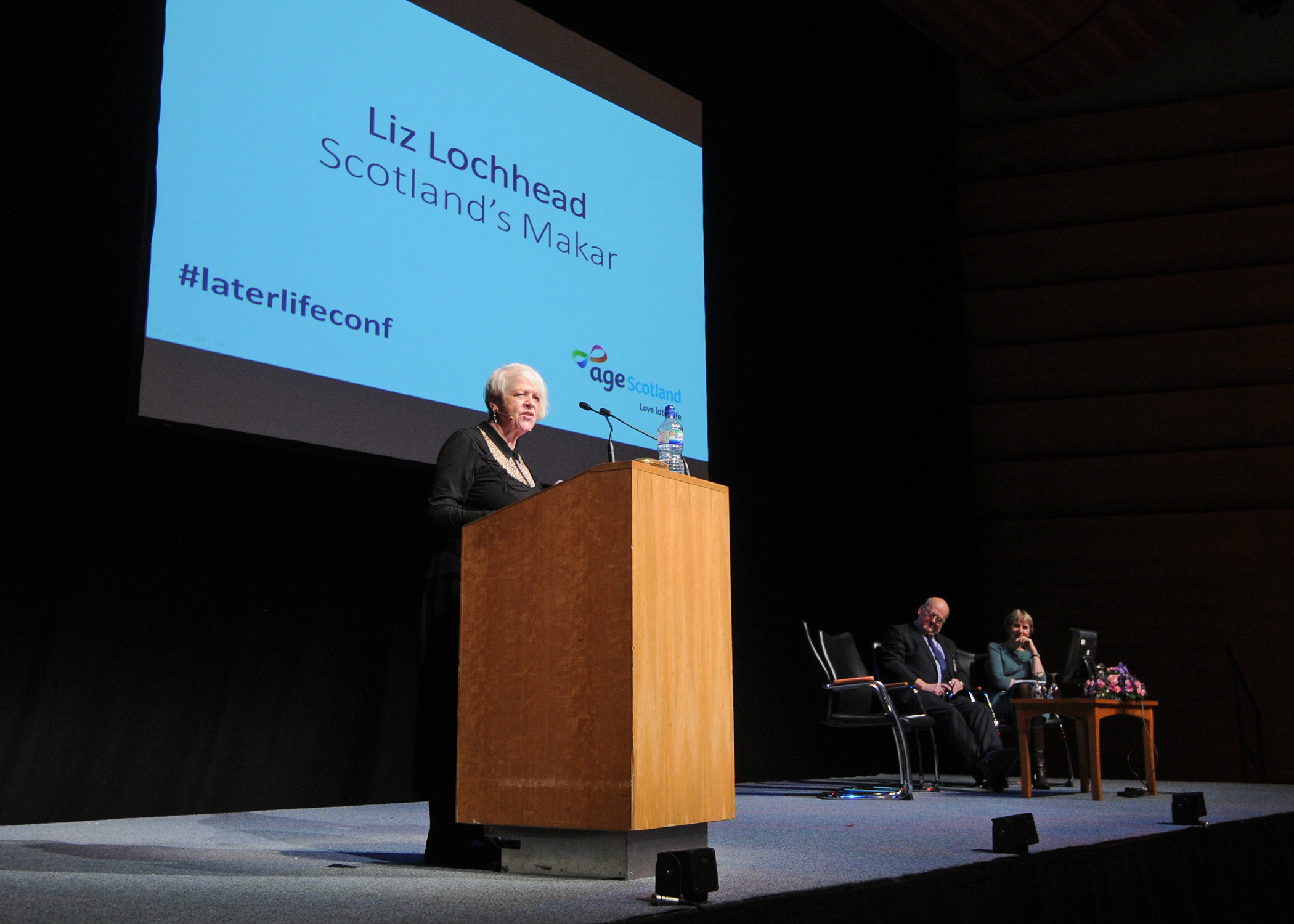 “Nobody is going to top it back up,” she said “so you might as well just make the most of the last half.”

Leishman, an accomplished after dinner speaker, addressed the concert hall as if he was speaking to his players in the dressing room before a big match.

Admitting there have been times when he had felt below the line, particularly after his wife Mary passed away five and a half years ago. At that time, he found he had to give himself a kick up the backside and look for a new adventure.

“I’m 61 and I feel great,” he said. “It’s just a number to me. I’ve got things to do and people to see. Its five years since my wife died and since then we have raised £725,000 for the Mary Leishman Foundation.

Over the last two years Age Scotland has doubled its membership among Scottish communities.

Brian Sloan, chief executive of Age Scotland, told TFN: “There are now nearly 1,000 groups from the Borders right up to the Shetlands and we wanted something to bring them together to hear their voice.

“We had a good range of speakers, we explored the issues and we very much explored the positivity about older people.

“What we want is the representatives of the member groups to take the message back to their groups and communities … and make a difference.”

And judging from the atmosphere in the room, the chances are it will.

The resounding message was that growing older isn’t a bad thing.

Take one pensioner who stood up and declared his happiness to the room.

“I don’t care what anyone thinks of me,” he said proudly. “I’m more comfortable in my own skin now than I’ve ever been.”

By the end of the day, there was talk of starting an older people’s movement, and the phrase “recycled teenagers” was being banded around.

Carol Craig, chief executive of the Centre for Confidence and Wellbeing, was one of the main speakers and typified the tone of the day.

She explained that her parents, who passed away last year aged 90 and 92, had not been a burden on society and had only needed outside assistance in the last six months of their lives.

Their secret, she said, was that they had a real sense of community, had plenty of access to activities and pursued more hobbies than you could shake a stick at.

The idea that people are in control of their own destiny was backed up by Bob Laventure of the British Heart Foundation’s National Centre for Physical Activity and Health.

“Exercise keeps the mind in vigour,” was his message.

“It’s never too late to start exercising,” he said, while getting the entire room to stand on one leg holding on to their chairs. “In 12 weeks you can put 20 years back on your legs.”

Although the overwhelming feeling throughout the event was positive, there were some clear messages for Age Scotland.

Members want it to speak out for older people, to help create more projects to bridge the generational gaps between old and young, to advocate for better transport links and more older people’s clubs and to fight against the stereotype of older people and ensure they are recognised for their contribution to society.

Get these things right and the feeling was that Age Scotland might not just have a movement, it could have a revolution on its hands.