Martin Crewe, director of Barnardo’s Scotland, on guinea pigs, regrets over Microsoft and his fear of becoming a problem 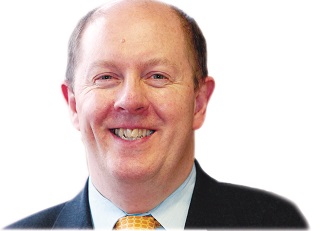 What time do you get up and what’s your morning routine?
At the moment I am woken up by our two puppies around 6.30am. Then it’s a whirlwind of activity to get all of us (four children, two dogs, three guinea pigs) fed, ready and out of the house on time.

What is your perfect weekend?
Everyone is so busy during the week that a bit of downtime with the family is essential. Nothing beats walking the dogs and the children on Corstorphine Hill.

What was the last thing you did that scared you?
Celebrated my oldest son’s 14th birthday – how on earth did he grow up so quickly?

Have you made your mind up about the independence referendum?
No, I’ll probably decide in the voting booth. I am attracted by the idea of self-determination but the upheaval of change has got to be worth it. I am a lot less bothered about the currency issue than I am about whether an independent Scotland would be a more just and equal society.

What advice would you give to your 22-year-old self?
Nothing too profound as the younger me would know better than to listen to anyone my age – maybe buy yourself some Microsoft shares.

Is this a step on the rung to success or your final destination?
I am not sure. I love my current job but have been doing it for seven years now. My fear is that as the chief officer you are the last one to realise that you have become part of the problem rather than part of the solution.

If you were your boss would you like you?
Yes. Honest, reliable and hard-working: what’s not to like? Oh, and did I mention modest?

Are boards the strength of the third sector or a thorn in its side?
They are the voluntary sector. Some of us have the privilege to work in this sector but the vast majority of charities are groups of concerned individuals who come together on an unpaid basis to change something for the better. It is an enormous strength that we have so many people in Scotland who are willing to put time and effort into enriching our society.

Brian Denis Cox or Brian Edward Cox?
Both – the former is a fantastic actor and, as an ex-geochemist, I would enjoy talking about the early history of the earth with the latter.