Billy Sloan the chief executive of Aberdeen based Save Cash and Reduce Fuel (SCARF) has died suddenly aged 47.

Appointed in 2012, he took the social enterprise into the Sunday Times top 100 not-for-profit companies to work for, during his brief time in charge.

A leader in the social enterprise movement in Scotland, Billy originally joined an unemployment programme with the Wise Group in Glasgow in 1995. 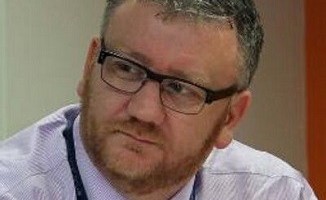 For many of his colleagues his memory will be his ready wit, his generosity and his charismatic leadership style. He devoted much of his time to mentoring and coaching colleagues in the social values and positive behaviours that he lived by.

He took part in one of the group’s intermediate labour market programmes designed to help long-term unemployed people develop new skills, get work experience and then access and sustain a new job. The programme lasted for a year and he worked as a trainee energy adviser.

Passionate about the alleviation of poverty and inequality and aware of the impact of tackling fuel poverty on households’ income he was appointed to a full time energy adviser post with the Wise Group in 1996.

In 1999 he was seconded to a new organisation, the Energy Agency, for 12 months to help train its new staff in the promotion of energy efficiency to households and in schools.

On his return from secondment he was quickly promoted to manage the Energy Efficiency Advice Centre and then in 2007 to the head of sustainability at the Wise Group.

His extraordinary commitment, energy and capabilities led to his role increasing. In 2010 he became a director for all operational delivery with responsibility for the government employability contracts, an innovative community justice mentoring programme, in addition to his sustainability portfolio.

Born in Glasgow, Billy spent his early years in Knightswood, where he attended Knightswood primary and secondary schools.

The family moved to Basingstoke when Billy was 13 years old and he completed his secondary education there. He attended Basingstoke College for a short spell then chose to return to Glasgow at the age of 17 to look for work.

“For many of his colleagues his memory will be his ready wit, his generosity and his charismatic leadership style. He devoted much of his time to mentoring and coaching colleagues in the social values and positive behaviours that he lived by.

“Outside of work Billy made and sustained many close friendships and was loved by everyone that was close to him. He was also the centre of attention, the joker and raconteur at social events. And he always said that he had a hoot and holler.”

He is survived by his sisters, Val and Gael, their husbands, Gordon and Dave, and his nephews and niece.