Brought up in a family that had to live with the repeat offending of his step-father, who had frequent bouts in and out of prison, Matt Fountain now wants to help recently released offenders find a crime-free path through life.

Fountain has first-hand experience of the knock-on effect that repeat offending can have on family members and children, and after seeing his mum lose her home and become homeless in 2011, he was driven to ensure nobody else has to go through what his family had.

Now, with the help of social enterprise agency Firstport his dream is about to become a reality.

Fountain, 27, is one of 15 social entrepreneurs aged between 16 and 30 and living in Glasgow that have been selected to take part in Firstport’s Commonwealth Games Legacy programme.

With the aid of a £2,014 grant and expert business mentoring support, financed by The Big Lottery Fund, he is ready to launch an artisan bakery just in time for the start of the games.

The business will see him employ and train recently released offenders as he tries to help them break the reoffending cycle.

His mum has now resettled in a council house but the memory of his family’s struggle is still fresh for Fountain.

“My mother’s partner going in and out of prison brought the family into financial ruin,” he said.

“What eventually happened was that my mum lost her house and was made homeless.

“I had left home by then but my youngest sister was 11 at the time. My mum became quite depressed and I think my sister did as well.”

It was at this point that Fountain, who worked in academic research, started looking into statistics regarding people who reoffend.

He found offenders who get a job on their release from prison are 91% less likely to commit a crime after two years than someone who is unemployed.

He then heard about a drug recovery charity in Italy called San Patrignano, which among other things, trains ex-offenders as chefs.

“These people are being pushed in such a positive way that they become valuable assets to society and the economy,” he said.

“We don’t have anything like that in Scotland, and not really in the UK, and my personal experience and research led me to believe there was a need to create something like that here.”

This is where the idea for Freedom Bakery came from.

Fountain has now linked up with the Positive Prisons, Positive Futures charity and the Firstport grant will allow him to start by employing one recently released offender to work with from his own kitchen in Glasgow during the games.

Together they will bake a range of breads, trade at market and distribute them via a bicycle delivery service. 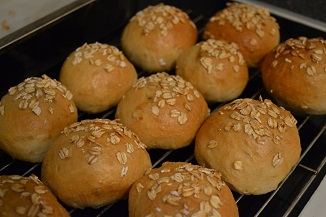 “I’m not a bakery profession, I am self-taught about three years ago. It clicked with me that it was a wonderful release working with your hands,” Matt continued.

“I would like to employ five or six people but see this as a pilot project. I had no assistance prior to applying to Firstport and had just been researching the model and identified that I needed help.”

Help is exactly what Firstport hopes the Beyond the Finish Line project will be able to provide to the east end of Glasgow.

It was set up as a challenge for the young people of Glasgow to use the momentum of the Commonwealth Games to regenerate there area through social enterprise.

In February this year, alongside its partner Ice Cream Architecture, Firstport selected Fountain and 14 other young social entrepreneurs who needed a bit of support to get social businesses up and running in time for the games.

Around 70 young people initially showed an interest, 45 attended a launch weekend and 15 were eventually selected.

Firstport provides each of the social enterprises with one-to-one support, funding, free workspace in Glasgow’s Trongate area and their own space to open premises during the Commonwealth Games if they need it.

Laura Smith, head of programmes at Firstport, explained: “We are working with them in our incubator space at 7 Trongate – a unit that has been empty for three years.

“They can come in anytime, use the wifi, have meetings and put on events. We’ve put on a programme of events for them with business experts relevant to their social enterprise to act as mentors – really getting them ready to open for business when the Commonwealth Games opens in July.”

As well as Fountain’s bakery, the other projects include a youth culture magazine, an uprecycling enterprise, an ethical clothing label and an illustration company.

As social enterprises, all the businesses are providing a social return whether that’s jobs, training or environmental solutions as well as aiming for a financial return.

“The project is only funded to December but it’s about developing businesses that will continue to run and contribute to the local economy,” said Smith.

To find out more about the project visit beyondthefinishline.org.uk.