The truth about poverty

Four years after its first meeting, Robert Armour revisits the Poverty Truth Commission to find out what difference its made to people's lives

When the Poverty Truth Commission (PTC) first launched four years ago in Glasgow’s City Chambers, the grandeur of the surroundings sat uneasily with many of the people attending.

For some it was their first foray into to the city’s seat of power, the place where the decisions affecting them are made without them and, occasionally, despite them.

What drives me and those who are in the same situation as myself is the fact that I’m making it known – my story is being told and, whether or not it falls on deaf ears, it can’t be denied

One of those attending was Margo McLean, a kinship carer who’d travelled from Bathgate to be at the launch. At the time she told me she wasn’t sure what it was all about but she was heartened by the idea her views, about her daily struggle caring for a loved one full-time, would be heard.

Four years later, we met once again, this time in the altogether less grand surroundings of Glasgow’s Woodside Hall.

While the venue might have changed, Margo, frailer but no less forthright in her views, said that although poverty has become more pronounced over the duration of the commission’s tenure she remained positive people like herself could still make an impact

“People say politicians don’t listen but they do,” she told me. “They hear everything because that’s their job. Whether they decide to act is a different matter and we know they’re selective in who and what they want to help.

“What drives me and those who are in the same situation as myself is the fact that I’m making it known – my story is being told and, whether or not it falls on deaf ears, it can’t be denied.”

Margo joined 450 others last Saturday as the commission launched its latest report on evidence it has gathered on everyday poverty over the last 18 months.

The research is mostly anecdotal: real lives affected by poverty and true stories of hardship in places you’d least expect it.

The commission believes that when people in poverty are listened to change happens. It uses the motto: “nothing about us without us is for us”, an old saying that has its roots in the pogroms of eastern Europe where unimaginable levels of hardship were experienced during and after the two world wars.

For many it’s not going overboard to relate levels of poverty in Scotland to the war years: Glasgow has some of the worst deprivation in western Europe, the conference heard. In some parts of the city mortality rates are as high as some areas of Malawi. And there are children suffering malnutrition and rickets – Victorian illnesses making an unwelcome resurgence in 21st century Scotland. 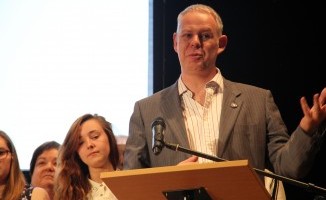 Society shouldn’t be about rich versus poor. It should be about equality. It’s not against wealth. It’s against poverty. We want it eradicated

On the everyday issues, Martin Johnston, chair of the commission, said this latest research has identified that people in poverty pay more for their fuel, food and financial services than those in better-off areas.

As a result he is calling on ordinary citizens, as well as politicians, to do more to challenge the cuts in welfare benefits which have contributed to 65,000 Scots visiting food banks in the past year.

“Why should we tolerate something which we can alleviate,” he said. “Society shouldn’t be about rich versus poor. It should be about equality. It’s not against wealth. It’s against poverty. We want it eradicated.”

For Johnston, and other commissioners, part of the problem is that decision makers have become disconnected from the reality of poverty. It has become something they read about, occasionally visit, but never live.

Policy makers are therefore basing decisions on false premises and actually more people living in poverty should be contributing to solutions.

A case in point is Tricia McConalogue, one of the commissioners and director of anti-poverty charity Bridging the Gap. She hails from the east end, works in the Gorbals and has chosen to live in Castlemilk because, as she puts it, she wants to be close to the people with whom she identifies.

“Politicians struggle to understand what poverty is because they don’t live the life,” she said. “You need to be close to the communities to understand their issues, their problems.

“I see it in work and where I live. But the biggest injustice isn’t that people live in poverty. It is that those in poverty aren’t listened to. It means they are locked into a world from which they can never escape. The commission is here to give these people the voice they deserve. No one else is doing it.”

The commission is also informing those holding the purse strings. Anne Marie Peffer, casework manager for Buttle UK, a grant-making trust, has been part of the commission since it was launched.

The stories she hears there influence how funds are distributed.

“Poverty is one of our priorities and I hear how people are being affected in their daily lives through my work here with the commission,” she said. “In order to alleviate poverty, Buttle prioritises grants to local projects.

“These grants can have a significant impact. When you live in poverty the small things often go unnoticed but it means you lose out in things we all normally take for granted.

“For example funding for child-care initiatives to give parents some respite has more impact than what you might suspect for families living in poverty.”

Five years after it was created, the PTC has giving people a voice but as it swears in its third round of commissioners, is it having any real impact?

I asked SNP MSP Bob Doris, one of the new commissioners, what if anything can be realistically achieved in the coming years.

“Firstly we’re here to listen,” he said. “These are real life accounts of how people are struggling with welfare cuts, with poverty and it’s something we need to address.

“Already this government is showing it will, where possible, mitigate against the worst excesses of the UK government’s savage welfare agenda. We’re hearing here today how this is affecting people, even those in work.”

According to Doris the Scottish Government is not only listening but taking action.

“We don’t want a Scotland that is unequal. Our view of society is very different from Westminster. We want to show we care.”

Not all are convinced however. Darren (pictured above), one of the outgoing commissioners, tells a tale of how his situation is bad enough but frequently made worse by over-zealous Jobcentre staff too eager to sanction him for the slightest misdemeanour.

“What we’re asking for is that people are given what they need to live,” he said. “And not treated with mistrust and suspicion. That just makes it worse. It’s bad enough having to endure benefits; sanctioning is just cruel.

The commission next reports in April 2016. By then the country will have been through the referendum and could be facing a new political agenda. For Darren however it probably means business as usual.

“Not sure that’ll change with a different government or a different political agenda,” he said. “It might. But a lot of this started before the Tories got in. If it does change it’ll take years to undo all the bad stuff already in place. Do I live in hope? I’ll get back to you on that one.”