​Homeless magazine adapts to the challenges of an increasingly crowded market

The Big Issue magazine has relaunched in order to meet the challenge of competition from free magazines.

It says its new look was necessary owing to the growing number of publications appearing on the streets.

Based in Glasgow, but distributed throughout the UK, the magazine is feeling the squeeze – particularly in London where a plethora of free titles are now in circulation.

The magazine costs £2.50, with half the cover price going towards a street vendor.

Although circulation has gone down in recent years, it claims sales per vendor are higher than they have ever been. 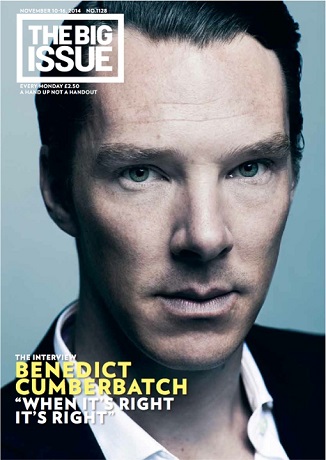 The magazine is now looking for ways to improve this, including providing some sellers with card payment facilities.

On the subject of increasing competition from the likes of Shortlist, editor Paul McNamee said: "From our perspective, rather than belly-ache, we say: right, we really need to work harder [for] people who are willing to give us their money.

"Obviously it hasn’t helped. When the market starts to get crowded the market becomes more difficult.

"And when people are in a mindset where they get free things they think, well, why if that’s free why should I pay for that one? So that's the challenge."

It relaunched with an exclusive interview with newly-engaged Benedict Cumberbatch on its front cover (right) and it has appointed new columnists, as well as a business editor, pop reviewer, political correspondent and social media editor.

The Big Issue has also started a scheme to recruit a street vendor on the editorial side of the operation on a six-month contract.

It is hoped the appointment will help the magazine get a new perspective and also get more stories from vendors.