In a blog, Joyce said the food parcels, which were spontaneously donated after scenes of violence in Glasgow, resembled a “minor religious icon” where people “paraded their charity” and expected to be applauded for doing so. 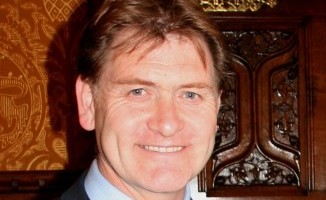 He's all talk on Twitter, but I want him to go head to head with me in a debate - Darren Carnegie

Darren Carnegie, who runs the Glasgow's Needy project alongside his father Andrew, accused Joyce of attention-seeking and asked him to qualify his argument in a debate.

“I am gutted,” he said. “I have worked hard for years to help the vulnerable poor and what we did last Saturday and Sunday started of as a peace protest but the great people of Glasgow came and helped our Glasgow’s Needy.

"This is something for Glasgow to be proud of" he said. "I want a public debate. He's all talk on Twitter, but I want him to go head to head with me in a debate."

The Falkirk MP, who left the Labour Party after being arrested twice for drink-related assaults, said in his blog: “The George Square jamboree seeks to reduce Glasgow to a city of poverty-porn.

"The city famously has its problems, of course, but these can only be dealt with properly-funded social programmes over time.

“Free food, quietly and efficiently delivered, might well have its place. Food bank fetishism, on the other hand, serves only the purveyors.”

The MP also engaged with enraged mebers of the public on Twitter.

One Twitter follower going by the name of Butterfly accused Joyce of being a “closet Tory”.

“Not since Thatcher have we heard such an attack on charity. You’ve been outed as a closet Tory,” they said.

0 0
eric joyce
about 8 years ago
Strangely politicised piece. Plenty of room for pejorative remarks and casual value judgements - odd for a third sector publication - about me and for my 'strident' No campaigning (evidence?) but none for Darren Carnegie's extensive Yes campaigning (including his own Yes tweets from the actual site of the foodbank)? The party politicisation of foodbanks will harm the concept - that much must surely be obvious to you and your readers.