The head of a life saving medical charity has told of his anguish at not knowing if his loved ones were alive or dead after they were caught up in the Nepal earthquake.

Shovakhar Kandel described the helplessness he felt as he watched news reports detailing the devastation – while he was on the other side of the world in Glasgow.

Kandel is the country leader of the Leprosy Mission in Nepal and was in Scotland for a conference held by the charity when the quake ripped through Nepalese capital, Kathmandu.

He spent at agonising 15 hours not knowing if his family was alive or dead before he finally got through.

Kandel then received the news he wanted to hear: everyone was ok – his family and his colleagues at the charity’s Anandaban Hospital. 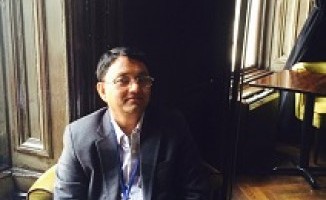 The world is with us. That is one of the amazing things and when I get back to Kathmandu I will share that with my team

His relief then turned to frustration at being so far from home and unable to help the mounting aid operation and then to a determination to do all he could to help survivors in the stricken country.

He is due to return home tomorrow (Saturday – the first available flight) to oversee the charity’s response.

Leprosy Mission works with some of the poorest people in Nepal – but as well as helping them, its teams are also tending to the many injured in the quake, which has claimed at least 5000 lives.

Kandel said: “The proportion of people affected by this earthquake is very high as many people like to come to the capital city and settle.

“People with leprosy are the poorest of the poor and they have been very badly affected. They live in very poor conditions so we at Leprosy Mission have come together and are trying to go out and find the people who are badly affected, who have become homeless, who are in need.

“We have teams all over the country, so we are putting into action our teams to the different districts. We have teams of medical experts and paramedics. We are attempting to provide food, shelter and first aid care.

“These teams can bring then bring people to the hospital for further care.

“The hospital is seven miles south of Kathmandu, it is the only hospital of any kind in the area, so it has been receiving a lot of casualties.

“It has been damaged by the earthquake – buildings have collapsed and wards and staff quarters have been damaged.

“However, by the grace of God, some of the buildings have remained intact so we can admit injured cases and still deliver services.”

He said his teams are able to get into remote communities because they have been working among them for the past 58 years and therefore have a network already in place which is ideal to respond to an emergency.

He added: “When we go out to the communities our focus is on people with leprosy but at the same time we will help others.”

When he returns he will lead and co-ordinate his charity’s efforts. He said: “The aid operation generally is lacking coordination and no one is taking a lead - the government seems very passive at the moment.

“But there has been a tremendous response from all over the world and for that we are very, very thankful. The world is with us together. That is one of the amazing things and when I get back to Kathmandu I will share that with my teams to motivate and encourage them.”

He continued: “We need the resources to meet the urgent needs which have been created by this devastating earthquake. We need technical support, we need money and we need medical supplies, first aid kits and tents. The monsoon season is coming very soon in Nepal and people have lost their homes.

“It’s been a frustrating wait to get back and I will be traumatised all over again when I land in Kathmandu when I see for myself what is going on there, but having been outside the country, I know the people of the world stand with us.”

Leprosy Mission was founded in India by a Church of Scotland missionary in 1874 and now supports people with leprosy in 26 countries.