A disabled couple have won their legal battle against a major leisure company after they were barred from entering a gay bar.

Charity workers Nathan and Robert Gale took Stefan King’s G1 Group to court for unlawful discrimination after being turned away from the Polo Lounge in Glasgow last June.

They said management told them they couldn’t come in as there were no disabled facilities on the premises. 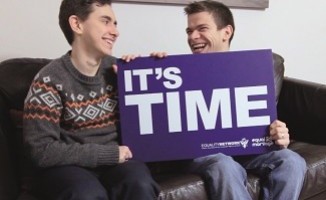 However, when the couple complained that they did not need access to special facilities, they were still refused entry.

This week, Glasgow Sheriff Court upheld their claim and awarded them £200 in compensation.

The case, which was taken on by advocate Russell Bradley, is considered significant because of the message it will send to businesses across Scotland on their obligations to comply with disability discrimination law including the Equality Act.

Speaking after the ruling, Nathan and Robert Gale issued a statement, saying: “We are delighted with the result which sends a clear message to businesses across Scotland that disability discrimination is illegal and will not be tolerated, just as we would not accept discrimination on the basis of race or sexuality.

“We hope this ruling will encourage companies to review their policies to ensure they comply with the law and provide the welcoming environment that their disabled customers deserve.”

The couple, who have both worked for equality charities in Scotland went to the Polo Lounge to celebrate after attending the Scottish Charity Awards 2013 as guests of the Equality Network, the Scottish LGBT equality charity, who won the Campaign of the Year award for their successful campaign to legalise same-sex marriage in Scotland.

The couple said it was particularly ironic and depressing to face discrimination at a gay venue on the night they had received an award for a major equality initiative.

Tim Hopkins, director of the Equality Network, said: “We welcome this important judgement, which sends out a clear message that businesses must not discriminate, whether on grounds of disability or on any other grounds, such as sexual orientation or gender identity. This case shows that people can use the courts to stand up against discrimination and win.”

A spokeswoman for G1 Group said: "G1 Group Plc accepted that Nathan and Robert Gale were wrongly refused entry to the Polo Lounge on 13 June 2013. This was a one-off incident and due to a misunderstanding by staff members in relation to wheelchair access to the Polo Lounge which is a listed building.

"The staff members concerned have been provided with further training in light of this incident.

"Robert Gale has been a patron of the Polo Lounge for many years and has been assisted by staff in the past to ensure his entry to the venue was fulfilled. We are grateful to him for acknowledging some positive feedback on staff attitude on his previous visits there. We continue to value Nathan and Robert's patronage."

0 0
Alex Thorburn
over 7 years ago
Great to here of Robert and Nathan's victory. Assisted a young lady many years ago to take a case in conjunction with the DRC - which she won and received much more in damages than this case. This proves that discrimination against anyone for whatever reason can prove very expensive - not only financially but in the diminished reputation of the establishment concerned.