The famous Kelpies are to be plunged into the dark as part of environmental charity WWF’s Earth Hour next weekend.

Andy Scott’s stunning 30m sculptures are the latest iconic landmarks which will have their lights switched off, joining the likes of Edinburgh Castle, Forth Rail Bridge, Eilean Donan Castle and the Kelpies’ near neighbour, the Falkirk Wheel.

They'll be taking their place alongside the Sydney Harbour Bridge and Times Square in New York, to show their support for the WWF initiative on Saturday, 28 March.

People are being asked to switch off their lights for an hour from 8.30pm. 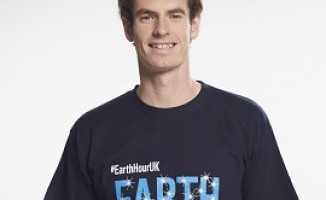 WWF's Earth Hour is a simple, but powerful idea. It's a global moment to show we care about our brilliant planet - Andy Murray

In 2014, Scotland joined a record-breaking 162 countries and 7,000 towns and cities in the world's biggest celebration for our planet – and it’s hoped even more will take part this year.

"The Kelpies – and the wider Helix project they're part of – are ideally placed to take part in this year's campaign.

"If we all walk a bit more, switch off lights and reduce our energy use, we can all make a difference to the planet. I'm glad the Kelpies are part of this year's campaign and I hope people will reflect on their energy use during Earth Hour 2015."

Lang Banks, director of WWF Scotland, said: "It's great news the Kelpies will be taking part in WWF's Earth Hour for this first time this year, and I hope that other landmarks and businesses will be inspired to also get involved.

“Earth Hour is more than just an hour of darkness, it's a community of people who are sharing their love for our planet and are willing to take action to protect it. By taking one simple step to switch off, you'll be joining millions of people from around the world in this special celebration."

The news comes hot on the heels of tennis ace Andy Murray also announcing his support to Earth Hour.

Murray, who is a WWF global ambassador, said: "WWF's Earth Hour is a simple, but powerful idea. It's a global moment to show we care about our brilliant planet, and want to protect the amazing people and wildlife that depend on it. Join me and millions of people around the world, by signing up to switch off on Saturday 28th March."

To find out more about Earth Hour, click here.