Cancer Research UK is able to fund 10 new clinical trials thanks to the surprise hit of #nomakeupselfieforcancer trend. 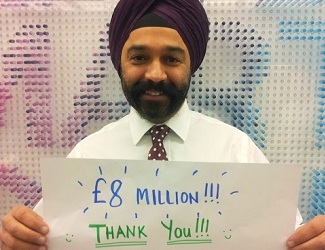 Women posting pictures of themselves online without wearing any makeup has led to a cancer research charity raising over £8 million.

The #nomakeupselfieforcancer trend unexpectedly took off on Tuesday last week when women across the UK began posting pictures of themselves without makeup on Twitter and Facebook.

It’s unknown who started the campaign but when people started asking how to donate, Cancer Research UK quickly suggested on its social media channels that they could donate £3 to it via text.

Since then, the charity has received an unprecedented increase in the volume of donations and visits to its website and has now raised enough money to carry out 10 new clinical trials.

Dr Harpal Kumar (pictured), chief executive of Cancer Research UK, said it had been an exciting week for the charity.

“We’ve been overwhelmed by the support people have been showing us,” he added.

Being able to fund more trials will bring forward the day when all cancers are cured.

“We don’t receive any government funding for our research and so it’s phenomenal to think that the generosity of the public is enabling us to fund critical research that we didn’t have the money for six days ago.

“Being able to fund more trials will bring forward the day when all cancers are cured.”

Unfortunately though, it emerged that some donors fell foul of text messaging errors and mistakenly donated money to Unicef and WWF by texting the words DONATE and BEAR to 70099 instead of using the word BEAT.

Children’s charity Unicef said £18,625 had been donated to it by mistake but that it would transfer it over to Cancer Research UK.

WWF said no money had been taken from mistakenly sent text messages as the charity contacts anyone who offers a donation by text before the money is transferred.