Parents have protested after homophobic comments made by Samaritan's Purse founder

Parents are protesting against a homophobic evangelical Christian charity that is carrying out Christmas charity aid collections in Scottish primary schools.

Pupils throughout Scotland are being asked to take part in shoebox appeals, where they bring in items which are placed in boxes and given to charities.

However, concerns have been raised about a right wing Christian group using this as a means of spreading its gospel – often including Biblical tracts with the aid when it is distributed.

The US organisation Samaritan’s Purse has drawn fire from parents after vitriolic homophobic comments made by its founder and main voice, Franklin Graham, the son of evangelist Billy Graham.

It runs Operation Christmas Child, which operates widely in primary schools throughout Scotland.

In a Facebook rant in support of a homophobic law in North Carolina which would ban transgender people from using their bathroom of choice and attack LGBT rights, Franklin Graham stated: “Your children and your grandchildren will be at risk to sexual predators and perverts. Is this what you want?

“Sexually perverted people want to come into the most private and sensitive area that we have as human beings – the restroom.”

Along similar lines, on 4 November, he used his Facebook page to launch an attack on Disney.

Graham wrote: "Disney used to be the brand that parents could trust. They were kind of like the gold seal of family programming. But those days are long gone. Disney is in the LGBTQ camp, and they’re wanting to use so-called family-friendly programs to influence the youth of today to accept and to be a part of the destructive LGBT lifestyle."

These comments have led parents at three primary schools in the west of Scotland to complain about their involvement with Samaritans Purse and have led to the schools ditching Operation Christmas Child in favour of other appeals. 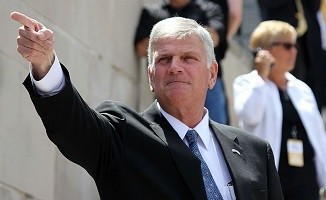 Your children and your grandchildren will be at risk to sexual predators and perverts. Is this what you want?

One parent told TFN: “Most parents are busy and don’t have time to do research, but it doesn’t take much to uncover stuff about Samaritans Purse which makes you feel uneasy.

“Why do non-denominational, state schools take part in this? It’s aid with strings. Then there’s the homophobic position of its founder.

“There are so many other charities that could be chosen – why does Operation Christmas Child have such a high profile?”

There has been much discussion of Samaritan’s Purse on the influential mumsnet site.

One poster said: “Children and schools should not be funding the evangelical missions of a rabid right-wing homophobic organisation like this.

“There are lots and lots of other organisations that allow your children to have the nice warm fuzzy feeling at Christmas without funding hate.”

Another posted: “Our school dropped it on the basis of the homophobia, thankfully. It is a colossal waste of resources too

“If you want to give actual gifts of things there are usually loads of local charities collecting for local people, young and old who have very little… give cash to charities delivering essential work with proper consistent relationships with communities on the ground, better reach and understanding and no evangelical strings.”

Secular organisations such as Humanists UK and the National Secular Society have all warned parents about Samaritans Purse.

Gordon MacRae, chief executive of Humanist Society Scotland, told TFN: “It will come as a shock to some parents to hear that their well meaning shoebox gifts collected through state schools is being used to promote evangelical Christianity, often to children and young people in vulnerable situations abroad.

“One charity has boasted about converting families from another religion through using such donations.

“There are many alternative schemes of gift giving that families and schools may wish to consider that do not promote any particular religion or belief.

“Any parents concerned about an appeal at their school should confirm with the head teacher who the collection is for, if any literature is added to their box (both in the UK and the country of donation) and what that literature says.”

Samaritan’s Purse confirmed that Biblical tracts are offered with aid, but said it helps people “regardless of race, creed, gender, religion, sexuality or ethnicity.”

A spokesman said: “Operation Christmas Child exists to let children in need around the world know that they are not forgotten and they are loved. In the spirit of Christmas, we deliver millions of shoebox gifts each year to children suffering from poverty, natural disaster, war, terror, disease and famine, many of whom have never received a gift in their life. No matter where we go, we don’t hide the fact that we are Christians. We always serve these children without any strings attached.

“Where appropriate, children receiving gift-filled shoeboxes are also offered a copy of The Greatest Gift booklet.

“This booklet gives children receiving shoeboxes the opportunity to know more about Jesus, and about Christmas, just like we do here through nativity plays, carol concerts and the like. Should there be any dissension in any community about the giving of shoeboxes, no distribution will take place."

0 0
Paul Braterman
over 3 years ago
Franklin Graham's outfit; creationist, homophobic, nonbelievers go to Hell, helped elect Trump. If your school collects for them, I think you should complain to Principal AND to Council Education Committee