A charity campaign led by the Scottish Council for Voluntary Organisations (SCVO) has won a prestigious national award.

Scotland’s Outlook, launched in March earlier this year, highlighted some 870,000 people are estimated to be living in poverty.

It won the Gold Award in the Not-for-profit Campaign category at the Chartered Institute of Public Relations (CIPR) PRide Awards Scotland.

The awards recognise and reward the best PR campaigns of the past year from public, private and voluntary sectors.

Ann Rowe, SCVO head of communications and marketing, said: “We’re totally over the moon that our Scotland’s Outlook campaign has attracted this recognition for helping to raise awareness of the scale and impact of poverty in Scotland. 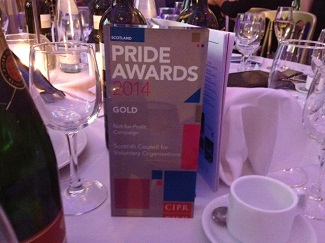 It set out, with the help of a debutant celebrity forcecaster, to highlight the perfect storm brewing of tough economic and financial conditions that could land at anyone's door.

Particularly it focused on the problems caused by rising fuel costs, a growth in malnutrition from people not being able to afford regular meals and the fact that one fifth of all children in Scotland are living below the breadline.

A spokesperson for the PRide Awards said judges were impressed with the “imaginative idea” of the broadcast.

The spokesperson added: “For the judges, the campaign's evaluation stood out which showed, among a number of impressive results, 96,126 people viewing the forecast.

“An interactive digital quiz to test your outlook on poverty also impressed.”

The video has since gone on to be viewed over 105,000 times on the SCVO YouTube channel.