This opinion piece is about 5 years old
4th October 2016
Guest post
Read next
ScotRail partnership could be worth £150,000 to MND Scotland
17th March 2017 by Paul Cardwell

I was diagnosed with motor neuron disease in March 2010. It came completely out of the blue. As a 46-year-old with three young children this was a devastating piece of news, particularly given the poor prognosis. I guess I was in shock for a few weeks, but I quickly got it together and have been giving it a good fight ever since. I’m in pretty good shape and will be fighting hard until the end. 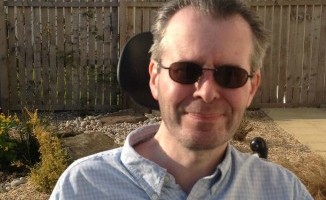 I was ventilated, had a feeding tube fitted and I was not expected to live for more than six weeks

I became a full-time wheelchair user in March 2012 and was seriously ill during the autumn of 2012. I appeared to be in the typical end of life spiral of MND and after a period in intensive care during November 2012, I was transferred to a hospice in December 2012. By this time I was ventilated, had a feeding tube fitted and I was not expected to live for more than six weeks.

At this point Stirling Council and NHS Scotland came together to ensure I was able to come home to die. A care package was put in place and after spending what we all thought was my last Christmas in the hospice, I came home on 27 December 2012.

Amazingly, due to the combination of good care, equipment and physiotherapy my condition improved and has since stabilised. Now I have limited mobility but I am still able to talk normally and eat a good, but modified diet. I can use the computer via iTracker, which enables me to control it with head control.

The support I’ve had from my wife Elise and family has been critical, particularly in the first few years of my journey. As well as my family support network I want to highlight the important role my care staff have played over the last four years. As well as supporting myself the care team also enable family life to continue, albeit in an adapted form.

Having been very ill in late 2012 it took me the best part of two years to stabilise my health to a point where I was able to launch my fundraising and awareness campaign. I cycle for around an hour most days on a MOTOMed Viva 2, which is a fixed rehab bike which I'm fortunate enough to have at home.

I hired this bike myself in November 2014 as the equipment isn’t available to MND patients either at home or even in a hospital setting. I felt within myself that I would benefit from this equipment. My doctors were sceptical I would benefit, but I think the evidence speaks for itself as to who was right.

Since I got the bike, I’ve cycled over 5000km and raised more than £100,000 for MND Scotland. I've also extended my fundraising efforts to two family orientated charities, The Children's Hospice Association of Scotland and The Muscle Help Foundation, and launched a YouTube channel to highlight issues faced by people with MND.

Raising awareness is just as important as the fundraising. The areas I’ve focused on include improving access to ventilation services, getting NHS Scotland to adopt the National institute for Health and Care Excellence MND guidelines, improving access to care services and getting DS1500 forms in place as soon as possible. These entitle MND sufferers to funded care, which is particularly important for those under 65.

We've made good progress in all of the above areas. I also met with health secretary Shona Robison in October 2015 to advocate for change and to let her see first-hand what could be achieved in the caring for those with complex conditions in their own homes. I've recently invited Shona back round so she can see for herself the progress we've continued to make over the last 12 months.

There are many MND sufferers out there who due to the postcode lottery have limited access to care and equipment, something that needs to change, and soon. Most of us don't have long – the average life expectancy after diagnosis is 14 months – so I want to help make that time as productive and high quality as possible.