As member of the Scottish Youth Parliament (SYP) for Cunninghame South, I have seen poverty first-hand and witnessed the detrimental effect it has on young people and their opportunities in life. The cycle of poverty is the number one cause of North Ayrshire’s struggle to give its children and young people the best start in life, and that is why I fully support SYP’s Poverty: See It Change It campaign.

The campaign is aiming to raise awareness among young people about child and youth poverty, highlight young people’s rights to an adequate standard of living, combat popular stigma associated with poverty, and finally, challenge elected leaders and key stakeholders to work together to uphold the UK-wide commitment to tackle child poverty by 2020.

I hope we can make elected representatives and key stakeholders sit up and listen to what young people have to say on this issue.

In politics, difficult issues like poverty don’t get fixed unless a dialogue is started and that’s what this blog is about. I was lucky enough to meet with Tam Baillie, Scotland’s commissioner for children and young people, recently to discuss the issues surrounding child and youth poverty and hear his thoughts on the situation. 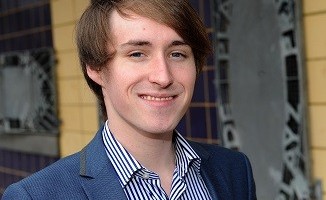 When I spoke to the commissioner about the work SYP is involved in through the campaign, he remarked on the need for safe spaces to be created so young people could come forward and speak openly about their experiences with poverty and the stigma which surrounds it. Tam emphasised to me during our discussion that when we consider poverty, we must also consider the impact upon an individual’s rights.

There is clear evidence to show that young people living in poverty are negatively impacted; it affects their rights to grow up well; their access to education and employment; and a healthy life free of mental health risks.

During the discussion, the commissioner also raised the point about his office’s recent report on young people’s views on education and poverty which led to the Scottish Government taking direct action to support things like cost of school uniforms and school trips.

Finally, when the conversation was coming to a close, I asked Tam what he thought about the campaign SYP had taken on. He said: “The SYP is giving young people a real voice, a real opportunity to influence and change the way things are. Keep up the pressure!”

Tam’s words inspired me and ring true - the Scottish Youth Parliament is enfranchising young people by empowering their voices.

At the moment, the 2015 SYP elections have drawn to a close and I am delighted we have witnessed an unprecedented volume of young people standing as candidates and voting. However, SYP isn’t only about its elected representatives - we need more young people from across Scotland to get involved in our campaign to tackle child poverty. Together we can keep the pressure on, and together we can end child poverty in Scotland by 2020.

Joshua McCormick is a MSYP for Cunninghame South