As August draws to a close, some charities are enjoying new-found wealth. Paul Cardwell spoke to comedian Danny Bhoy about how he turned comedy into charity cash

Ever heard the one about the socially aware comedian who raised over £75,000 at the Edinburgh Fringe to help local charities marginalised by the government?

Well now you have thanks to funnyman Danny Bhoy.

Danny, who has appeared on shows such as Live At The Apollo and The David Letterman Show, led a number of celebrities at the festival this year who used their fame to support a good cause.

As well as those utilising Edinburgh as the backdrop for their ice-bucket challenges, Sara Pascoe hosted the inaugural Stand Up for Shelter gig and Waverley Care was inundated with comedians for its Tartan Ribbon and Comedy Gala events.

But TFN’s favourite has to be Danny whose 12 Nights 12 Charities raised £75,240.61 to be split equally among 12 local Edinburgh charities.

The idea for a charity performance at the Fringe had been in the ether for some time, Danny told TFN.

His sister Bina Chaudhry is the deputy chief executive of the Edinburgh-based charity Multi-Cultural Family Base (MCFB) which works with disadvantaged children and families and originally he planned to do a one-off gig for it, but with Bina’s husband working for homeless charity Foursquare and them suggesting other worthwhile causes, it quickly snowballed.

Having performed at the Edinburgh Fringe for over a decade to sell-out crowds at venues such as the Edinburgh International Conference Centre, Danny was confident about pulling in a loyal crowd. “It felt like a good time, and the right time, to give something back to the city,” he said. 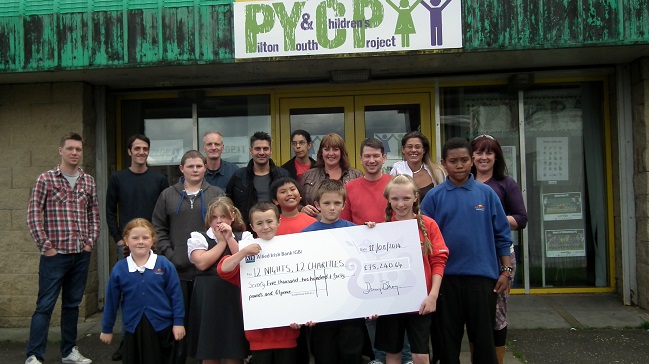 “Here comes the politics – I was also motivated by the increasing marginalisation of charity and social work groups by the government.

“It may start to sound a bit of a cliché, but as yet no one has ever explained to me why, in times of trouble, the people that need funding the most have to burden the deepest cuts? And why no matter how cash-strapped we are as a nation, we can always seem to find money for wars? Take that government!”

Over the 12 nights Danny played to sold-out audiences at The Assembly Rooms with all ticket sales as well as bucket shakers’ collections donated to the charities.

No one has ever explained to me why, in times of trouble, the people that need funding the most have to burden the deepest cuts?

Overall each charity received around £6,270.

Bina, who helped organise the shows, told TFN she was immensely proud of her hugely generous younger brother.

“Without him the whole thing would obviously have not happened. I know he worked extremely hard on the show and avoided using the usual publicity and expenses to secure as much of the funds as possible for the charities,” she said.

“We chose the charities, in part, by geographical location and to reflect fairly the needs of the city.

“Another important intention was to cover the diversity of provision for children and families – the 12 charities cover issues such as disability, inclusion, homelessness, mental health, chronic illness, parenting support and youth work.

“The money will go to building on and, for some of the charities, creating new services to support families across the city.”

MCFB is using its share to continue to develop its Scoring a Goal for Inclusion project. PYCP and Broomhouse Carers will be spending theirs on some residential trips, Mypas is developing its counselling services and Foursquare will continue to provide its accommodation service for vulnerable young women at No20. Wellspring has embarked on a new children and young people’s service that will be taking referrals from some of the 11 other charities and The Citadel is using the money for outdoor activity weekends for young people in its intermediate and senior youth clubs. 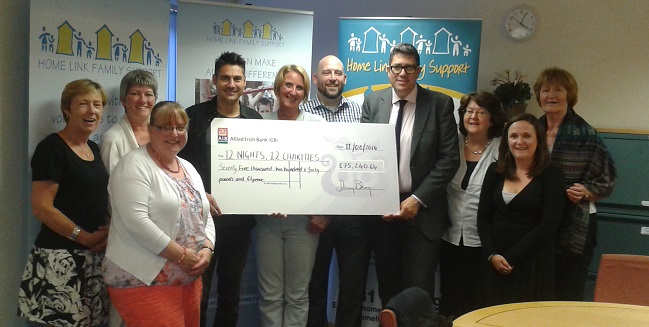 At the end of the run Danny further added to his star-quality by embarking on a two-day visit to the 12 charities to personally present them with their cheques and modestly tell each one that they were the “real heroes”.

Rhianna Adams of Teapot Trust said: “Not only has he raised a fantastic amount of money but he has also helped to raise the profile of each of the small charities which is priceless.

“We cannot thank Danny enough and believe his kindness, funniness and heart should be acknowledged.”

“The money he has raised for Home Link will ensure that our preschool befriending service can continue to help families and children who are most in need and at a time and place that is most suitable for them.”

Bina added: “I can’t thank everyone from the charities enough and also include Tommy Sheppard and his team at the Assembly Rooms for all their patience and support.

“I would also like to thank the kind people of Edinburgh who not only came to the shows but proceeded to give so big-heartedly into our little yellow buckets.”