What’s the first thing you do when you arrive at work?
Check in with staff to see how things are.

How often do you socialise with colleagues?
Not as often as we should. We do birthday get togethers, we have a team day out during the Edinburgh Festival and an indulgent Christmas lunch. We also have a bit of an informal tradition known as Prosecco Friday which provides a positive conclusion to the week’s business!

How did you end up in your job?
I’m a failed artist who worked in the cultural sector as a creative facilitator; morphed into a cultural sector manager, then director, before deciding that the charitable cultural sector needed more strategic support in order to become less grant reliant and therefore more sustainable – which is what we try to do at Arts & Business Scotland.

Have you made up your mind who you’ll vote for in the General Election?
No comment! 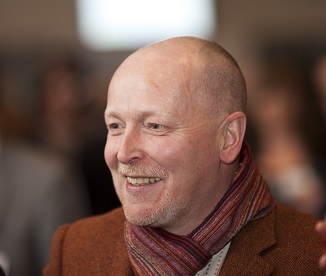 Do you know what Dubsmash is?
Some sort of video messaging application…way too technical for me.

Is it better to work for a big charity or a small charity?
Working for a small charity means that you get to see the direct benefit of the work that you undertake. As a people person, I enjoy that immediacy of communication with the stakeholders that we try to support.

What advice would you give to your 22-year-old self?
In retrospect I would have advised myself to transfer from a fine art degree into something based within the creative industries sector (so as not to waste time between 1985 and 1995 aspiring to being a self-sustaining practising artist).

Is this a step on the rung to success or your final destination?
I have a recurring pattern that I move jobs every six or seven years, so on that basis I’m here at Arts & Business Scotland till the summer of 2019…then who knows what!

What was the last thing you did that scared you?
I’m not very good with needles, so that would be the last visit to the dentist or when I was in hospital last year.

Who should win best actor at this year’s Oscars?
I don’t watch many commercial films, so wouldn’t know who to vote for. Unfortunately I’m forced to view quite a lot of kids films (I have a 12-year-old daughter and 8-year-old son).

Would we all be better off if charities did more in our society?
I think they already do, but the public is probably unaware of their impact. In terms of the cultural sector charities, a significant amount of their work addresses health and well-being agendas and contributes to cultural tourism and cultural placemaking. We need to get those messages across so that culture is appreciated for both its intrinsic and additive value.

Why do you work in the third sector?
Because there is always a sense of reward that you are making a positive contribution to civic society.

If you were your boss would you like you?
I’ll have to ask my chair of the Arts & Business Scotland board that one and get back to you!