James Jopling, director for Scotland at Breakthrough Breast Cancer, on netball, sausage dogs and taking the long road to the top

What time do you wake up?
In the summer time/peak seagull time from 5.30am, when I curse both the marvellous Scottish light and the seagulls. Otherwise around 7.30am.

What is your morning routine?
As long a shower as time allows, now accompanied by listening to BBC Radio Scotland. This is as a recent referendum coverage convert from BBC 5 Live. Followed by granola and a bike ride to work across the Meadows.

Why do you work in the third sector?
Nothing appealed after a business degree at the University of Stirling until volunteering for Oxfam caught my eye in the Scotsman. From there a paid job with them in Oxford came up before finally in 2001 Shelter Scotland brought me back here. Having worked commercially, while I'm not precious about the specific cause, I am absolutely committed to the idea that the voluntary sector has the power to change lives.

What makes a good day at work?
Feeling we've made progress to stop breast cancer – primarily through our amazing supporters or by our work influencing with impact on issues like access to new medicines. Hearing stories that can amaze and send you to despair but ultimately remind you why this is a job absolutely worth doing.

What do you procrastinate over?
I sometimes feel uncertain when recruiting people – the perfect outcome being an amalgam of many candidates. When someone shines out they are almost always brilliant. 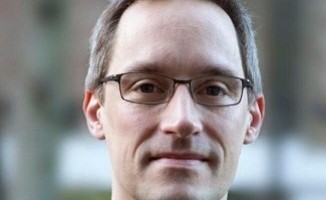 When the culture and values are right and the work of a charity truly reflects the needs of beneficiaries then there is nothing more powerful.

How often do you socialise with colleagues outside the Christmas party?
I've been known to make breakfast for the team in Scotland and we regularly have a cupcake break for afternoon tea. Although in recent times we've tried to replace this with a communal fruit bowl. Less icing for one thing.

What is your perfect weekend?
Weekends are when I look after my 10-year-old son and so I'm unashamedly pandering to his needs. Living in Edinburgh gives great scope for that; recent highlights include mountain biking at 7stanes, culture at Jupiter Artland and a walk up Salisbury Crags.

Should there be a cap on charity chief executive pay?
As charities are large and small I think pay should be commensurate with that scale.Cancer Research UK fund something like two thirds of all the cancer research in this country and with that responsibility comes the need to recruit the best person to lead such an integral part of our effort to overcome the disease.

How did you end up in your job?
I actually applied for the director post back in 2008 and got down to the last two. Narrowly (I like to think but in reality she’s far more skilled) beaten by Audrey Birt, now chair at the Health and Social Care Alliance. I was so impressed with the clarity of purpose of the charity and when I met Audrey herself, I decided to take a different role in the charity. Then, when the chance came to take on the directors post I was delighted.

Are boards the strength of the third sector or a thorn in its side?
A bit of both – as a trustee of theScottish Refugee Council I can see just how annoying I could be as a trustee. But if I get that role right, it's about helping to ensure good governance and direction for the charity as a help to the remarkably committed team.

Would we all be better off if charities did more in our society?
I don't think charities have an automatic right or ability to do anything better than any other type of public or private sector body. Often those employed by charities come from other sectors. But when the culture and values are right and the work of a charity truly reflects the needs of beneficiaries then there is nothing more powerful.

What advice would you give to your 18-year-old self?
Playing netball will give you friends for life so don't listen to the doubters. You can't really re-invent yourself with a mustard jumper knitted by your mum and DM boots.

Brian Denis Cox or Brian Edward Cox?
Loyalty to my sons' sausage dog Brian means Brian Edward (the astronomer) as that is who my son thinks the dog is named after.

James Jopling is the director for Scotland at Breakthrough Breast Cancer