September 18 may be the biggest day of the year for many Scots but for others October 11 may prove to be even more significant.

Coming Out Day is celebrated around the world by lesbian, gay, bisexual and transgender (LGBT) people to celebrate coming out and to raise awareness of the LGBT community.

Moreover it has become a day for people to tell friends or family they are lesbian, gay, bisexual or transgender.

For Scotland’s young people’s charity LGBT Youth Scotland it to will be a big day. Not only is it helping its members celebrate it also marks the end of its first foray into crowdfunding.

To fund its latest campaign Shh! – Silence Helps Homophobia – the charity is attempting to raise £7,500 via fundraising website Indiegogo.

LGBT Youth Scotland chief executive, Fergus McMillan said: “Homophobia often goes unchallenged, as people are unsure or afraid to name it. As a result, many people either choose to ignore a homophobic incident altogether or deal with the situation without mentioning the real issue – homophobia.

“We are very excited to launch our first crowdfund as part of this campaign. 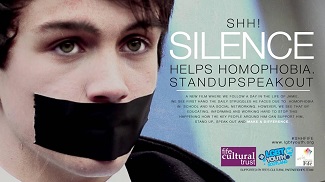 “With your support we hope to raise more than £7,500 to enable the delivery of our work with schools as safe and welcoming environments for lesbian, gay, bisexual and transgender young people in order that they can become successful learners, confident individuals, responsible citizens and effective contributors.”

If the campaign, which closes on Coming Out Day, is successful then LGBT Youth Scotland plans to roll out an education programme to Scottish schools.

The programme aims to highlight the importance of naming homophobia and giving a clear message that it is never acceptable.

It makes use of the short film Shh! Silence Helps Homophobia (above), which was created by Fife LGBT youth group Flavours of Fife. The group scripted it, got funding and developed it with the support from the Fife Cultural Partnerships Fund.

It focuses on one young person’s experience of homophobia at school, asking what could be done differently and calling on people to stand up and speak out.

Every time we remain silent, we help homophobia happen. It’s everyone’s responsibility to name it and never accept it.

“It’s everyone’s responsibility to name it and never accept it.”

The film has proved to be a huge internet hit, amassing nearly 40,000 views on YouTube with many positive comments.

The seven-minute long clip has also won an Institute of Internal Communication’s award and was nominated for an Event and Visual Communication Association Award and Scottish Creative Award.

Despite the film’s success, raising funds to promote it in Scottish schools has been challenging, which is why LGBT Youth Scotland has turned to crowdfunding.

Kitson explains: “We are always trying to come up with ideas that are young and dynamic and that engage youth interest. As an organisation, schools work is so important to us but is often underfunded so this was an ideal way to try a new method of funding.”

A number of incentives are on offer to any individual or organisation who pledge money.

For donating as little as £5 you will get a shout out on the LGBT Youth Scotland Twitter and Facebook page.

Those who donate £1,000 will get a personal thank you pack, a meeting with the charity’s chief executive and the LGBT Youth Scotland staff team or training sessions to the value of £1,000.

OnOctober 11 LGBT Youth Scotland is inviting people across Scotland to sharetheir messages of why they won’t stay silent about homophobia using the hashtag#wontstaysilent on social media.