Veteran fundraiser plans to donate £25,000 to children’s hospital charity if he can reach his target

The Sick Kids Friends Foundation (SKFF) is calling on big-hearted Scots to help their eldest and most esteemed volunteer reach another fundraising milestone by the end of this year.

94-year-old Tom Gilzean collects for the Edinburgh children’s charity and a number of other worthy causes round-the-clock on the Capital’s Royal Mile and has to date has raised more than £100,000 the SKFF.

This year the war veteran has continued his mammoth efforts, collecting £45,000 for a number of charities close to his heart. However, the kind-hearted fundraiser is determined to hit the £50,000 mark by the end of the year.

Tom said: “I’m out collecting in all weathers, which can very cold and rainy but I love it. I’m delighted that this is the most I’ve ever collected in one year and I would like to donate £25,000 to the Sick Kids if I reach the £50,000 mark. 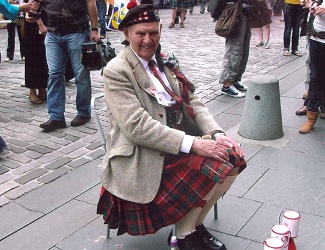 “Nothing will stop me from fundraising and I’ve already signed up to be a volunteer next year. This gives me something to look forward to as I approach 95 years old. It’s so important to me that I keep raising money. I’ve been fundraising for 80 years now and I’m determined to keep going until I’m 100. I want to say thank you to everyone who gives so generously – I couldn’t do it without you.”

The money raised by Tom is used to provide world-class equipment such as mini image intensifier scanning equipment worth £53,000 and extra family-friendly services including art therapy and parent accommodation at the Royal Hospital for Sick Children (RHSC) in Edinburgh. Tom also supports several causes to help injures soldiers, pensioners and disabled children.

The SKFF is asking others to step up and help Tom raise the final £5,000 required to cross his fundraising finish line by 31 December. Sick Kids supporters can back Tom by donating via his first ever online fundraising page.

Maureen Harrison, chief executive of the Sick Kids Friends Foundation, said: “Tom has been one of our greatest supporters for many years and we’re overwhelmed that come rain, shine and even illness Tom continues to work so hard to raise funds for a number of great causes including the Foundation.

“We think Tom deserves to take a break from his tireless campaigning and would love to see as many as people as possible make an online donation to help this legendary volunteer reach yet another ambitious milestone.”