A charity chief executive has revealed he is battling a rare and aggressive form of cancer.

David Drysdale, who founded and continues to head Fathers Network Scotland (FNS), is receiving treatment in hospital – and has spoken candidly about his fight.

He said his biggest fear is having to say goodbye to his wife and child.

Drysdale is taking a step back from leadership of the charity, which campaigns for dads to play positive role in their child’s life. 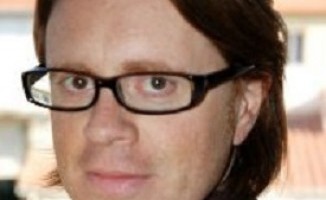 Embracing this cancer isn’t as easy as I thought. I’m terrified and I feel grief when I think of how I may be saying goodbye to my wife and my son

In a blog post on the FNS website, he writes: “Late last week I was told that I’ve got a rare and aggressive form of cancer (which explains the back pain I’ve been experiencing over the last few months). I’m now in a bed in the Western General hospital in Edinburgh having been pumped full of morphine and chemotherapy drugs.

“I had wondered whether I might get the cancer verdict and had thought how I would be with it: could I embrace it and take it in my stride? Yes, I thought.

“And now I’m here and something has happened I never anticipated – I’ve lost control of my legs. In fact I’m paralysed from the stomach down. There’s a possibility I may never get my legs back – or my bladder. I’ve gone from always being fit, healthy & independent to being bed-bound and helpless in what seems like just a few hours.

“So the embracing of this cancer isn’t as easy as I thought. I’m terrified and I feel grief especially when I think of how I may be saying goodbye to my wife, Misol, and my seven-year-old son, Manow. And can I do it in a good way?

“And of course the intensive chemo and radiation that have been scheduled might do the trick – it’ll take the rest of this year and I’ll lose my hair and will be as sick as a dog from all the treatment (apparently). Do I have what it takes to get through all that?”

He said the time has now come to put his own family first and hand over leadership to the charity’s board.

He writes: “I have nurtured this organisation from inception and it’s my personal pride and passion to be part of such a positive movement that is challenging unhealthy and limiting gender stereotypes – and helping men to step more fully into their role as fathers – at the heart of both their children’s and their family’s lives.

“But right now I am all too aware that this role means putting our own families first and making sure we look after ourselves. I have discovered these last few weeks that unless I have my health I cannot look after my family – which includes FNS.”

FNS has recently won funding from the Scottish Government to launch a Year Of The Dad campaign in 2016.