Social care charity Quarriers achieved a fundraising goal this weekend as it passed the £1 million mark for money raised at its annual Christmas event.

Guests were in particularly generous spirits for the charity’s 21st Noel Lunch, raising more than £70,000 which took the grand total raised over the years to £1,020,000.

Starring comedy favourite Fred MacAulay, the event was hosted at the Marriott Hotel in Glasgow and guests were treated to a programme of fine food and entertainment, including an auction with exclusive golfing memorabilia thanks to Quarriers’ status as an Official Charity of the 2014 Ryder Cup. 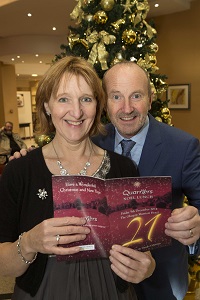 All funds raised at the lunch will go towards the charity’s Box of Hope campaign, which aims to spread a little festive joy this Christmas by providing young homeless people with basic winter essentials.

Speaking at the event, Quarriers’ chief executive Alice Drife said: “We were completely overwhelmed by the money raised at last year’s Noel lunch and the guests have shown tremendous generosity yet again. The funds raised will make a huge difference to our Box of Hope campaign and passing the £1 million mark is evidence of the fantastic support we’ve received over the years.

“The Box of Hope campaign can have an extremely positive impact on a young person’s life and we must now carry on the positive momentum from today’s event and ensure the initiative is a success.”