70 years since Nagasaki: the threat of annihilation on our own doorstep

​Jackie Copleton is the author of acclaimed novel A Dictionary of Mutual Understanding, which deals with the aftermath of the A bomb attack on Nagasaki. Here she reflects on that and the inspiration to be gained from the peace campaign closer to home.

The naval vessels on patrol are the first clue, followed by the tugboats and then the waves that slap against the shore. Loch Long is normally a still flat body of water – unless a submarine is on manoeuvres.

We can see Coulport, where the UK's nuclear warheads are stored, across the loch from my in-laws’ holiday caravan in Argyll, Scotland. Sometimes the submarines breach the surface as they head to the base and I find myself wondering too idly, “Is that a Trident sub?”

The UK’s Trident programme is made up of four Vanguard-class submarines armed with nuclear missiles, with one sub always on active patrol. Next year Trident is up for renewal. MPs are scheduled to vote by March 2016 to release funds for its replacement, known as the Successor.

The Ministry of Defence has said Trident will cost £17.5 billion to £23.4bn to renew. The Campaign for Nuclear Disarmament puts the bill nearer £100bn.

Check out the image on Wikipedia for Trident, and you can just about make out our family caravan park in the distance. We build fires most nights when we stay there. Those waves sound louder in the dark as the midges swarm and the whisky burns in the stomach.

My father-in-law is a retired social worker of an extreme left persuasion, shall we say. He tells the story of the poster they put up in their office in the 1980s of the naval base at Faslane, on Gare Loch, where Trident is based, 3kms from Coulport. Concentric circles of destruction were marked on the map, back to his office in Glasgow, 25 miles away. 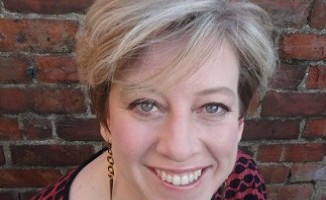 Peace campaigners have set up a permanent camp at Faslane since 1982. You can drop by, chat with them, be inspired by their commitment

Peace campaigners have set up a permanent camp at Faslane since 1982. You can drop by, chat with them, be inspired by their commitment. I did on the day my novel, A Dictionary Of Mutual Understanding, was published. Somehow it seemed fitting, having written large portions of the book looking out at Coulport.

In the 1990s, I was living in Nagasaki in Japan when I attended the 50th anniversary of the atomic bomb. I remember a boy eating ice cream by a fountain built to commemorate the mortally injured who cried out for water.

Near him were reproductions of photographs taken by Yosuke Yamahata on 10 August, 1945, the day after the bomb was dropped: a wounded baby is breast-fed by its mother, a brother carries his injured younger sibling, a mother and child stand too dazed to eat the rice balls in their hands, and then there are the bodies, the terrible burns and the shattered landscape.

The 70th anniversary took place on Sunday and children gathered at Nagasaki Peace Park to sing songs surrounded by home-made lanterns covered in messages of peace. Thousands of miles away, my young nephews spent the last days of their school holidays at the caravan. I imagine them in their wellies, fishing nets in hand, as the tugboats chug past. They lift small plastic binoculars to their eyes and moments later those waves lap against their feet.

My one small comfort is this: At least they are still too young to worry about the submarines that pass unseen metres from them – and the load they carry.

A Dictionary Of Mutual Understanding, published by Cornerstone, is out now