Sunny He Huang, 45, works at the EdinburghRoyal Infirmary as a cardiac theatre nurse. She came to the UK from the Liaoning Provence in China in 2004 and quickly made Scotland her home and is believed to have become the first person from China to have officially climbed all 282 Munros, all for Christian Aid.

My love of hill walking started when my only child went to university and I was feeling at a bit at a loose end, so I started walking on the Pentland Hills.

Two years ago, a friend suggested I join them for the 70 Munros Challenge to raise funds for Christian Aid.

Once I started, all I thought about was completing the 70 but then this year in May, I completely caught the bug again and I became determined to climb all 282, spending every single weekend and day off completing Munros. When I reached the top of the last one, I was absolutely delighted

I completed my final Munro with a large group of friends, colleagues and family. For many of them, including my son, Botao Zhou, a 21 year old student at Heriot Watt, it was their first Munro. 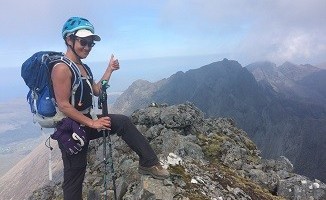 It’s been tough emotionally and physically climbing so many Munros in such a short space of time.

Last year on my birthday in November, I climbed Am Basteir on Skye. It was by far the most dangerous one I’d climbed as there was a thin layer of snow and it was really slippery and wet.

My family, friends and work colleagues have all been amazing and so supportive. I threw a party at the weekend to thank them and to say sorry for all the get togethers I’ve missed whilst trying to complete all the Munros before winter”.

The reason I shoes to raise money for Christian Aid was that when we were growing up we were very poor. I am not rich now but at least I have enough to feed myself, my family and have a roof over our heads. I’ve always wanted to help people living in poverty. This is why I’m supporting Christian Aid, to make their vision – to help end poverty - become reality”.

When I heard from the Scottish Mountaineering Club that I was the first person from China to have officially climbed all 282 Munros, it was fantastic news. I was actually quite emotional and I was proud for China to have finally reached my goal”.

I climbed my first Munro, Ben Narnain, in July 2015 and climbed the last one Meall Chuaich recently. I climbed most of the Munros with friends but climbed over hundred just on my own and 132 since May alone.

For my next challenge, I would like to walk the length of Hadrian’s Wall and I have three Corbetts in mind that I’d like to climb.