South Sudan: The food has run out - you cannot let us die

Fergus Conmee, head of Africa for The Catholic Agency For Overseas Development (CAFOD) met those in South Sudan suffering from the famine

While I was in South Sudan in last month, I met a man called Santino Matwili.

It was not until I went to shake his hand that I realised he was blind – due, he said, to extreme hunger. "Food has run out," he told me. "You cannot let us die."

Drought had already left Mr Matwili and his family struggling to survive, but what drove him from his home with his wife and children was the fighting that has plagued South Sudan since 2013, barely two years after the country became independent in 2011. 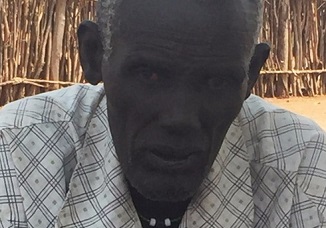 The hunger this year is very dangerous, far worse than previous years

"The hunger this year is very dangerous, far worse than previous years," he said. "We have not been able to grow food, as no rain has come." Now that civil war has displaced the family, they have nothing.

I met Mr Matwili in Adior, a village about one hour from Yirol, a relatively peaceful town where many people have fled.

Yet even here hunger is evident in the thinness of children, and the way clothes hang from the bodies of people already suffering.

This very poor community is used to food shortages – in June and July most years, when the previous year’s stocks of sorghum and millet have all been eaten, people cope before the next harvest by foraging wild fruit and berries in the forest.

But this year all the grain has already gone, and wild fruit and leaves are disappearing fast. It will be six months or more before any crops are ready, and then only if there is rain.

Everyone hopes that rain will come in April and May, allowing crops to be planted for harvest in August. The people of Yirol would rather do this than rely on food aid.

But unless they get food now, the women who are usually responsible for tilling the land (as well as fetching water, cooking, washing and childcare) will be too weak to do so.

If drought and conflict were not enough, even the little revenue that South Sudan earns from oil - almost its only export - has been squeezed by falling prices.

In the capital, Juba, aid workers and church officials told me of their despair at this silent emergency.

The hopes at independence have been crushed since December 2013, when fighting between supporters of the president and vice-president broke out in Juba, and very quickly spread.

What was initially seen as a political conflict, quickly turned into an ethnic war, with millions displaced across the country and into neighbouring states.

Peace attempts have come and gone.

Among them was Monica Achol Deng, who escaped to the capital after violence broke out around her home in Jonglei in 2013. From Juba she walked over 200 miles to Yirol with her five children, the eldest of whom is seven, carrying her youngest child in her arms.

Monica showed me the kwor leaves she picks from bushes in the forest and boils to feed her children once a day. She feared that when this supply was due to run out later that month there would be nothing left to eat.

The United Nations estimates that more than 3.4 million people – almost one in every three South Sudanese – have been forced to flee their homes since the conflict began, including nearly 1.9 million internally displaced people and 1.5 million refugees in neighbouring countries.

The UN and relief partners have just appealed for $1.6 billion to help save 5.8 million people in South Sudan, but is anyone listening?

People in Yirol say conditions are as dire as those which resulted in famine in 1998, when over 70,000 people died.

I’ve been an aid worker for many years, and I am extremely cautious about using the word "famine", but this is now the declaration in two counties of Unity State in South Sudan, and our worst fears have come to pass.

Amid the rising needs elsewhere in the world, now is not the time for the international community to walk away from South Sudan, they must sit up and notice, and together we must do all that we can to save lives.

Fergus Conmee is head of Africa for The Catholic Agency For Overseas Development (CAFOD).