Scottish cultural mix of the country’s three languages, Scots, English and Gaelic, means that from the craic of the east coast to the patter of towns in the central belt, traditional idioms and turns of phrase that would trip the foreign tongue are never far off. However questions about Scotland’s fourth official language are often greeted with puzzled looks or a bemused radio silence; what fourth language? British Sign Language (BSL) follows its own syntax and grammatical structures that varies from English and is the manual language of the Scottish deaf community, a unique linguistic-cultural group numbering around 6,500 people. 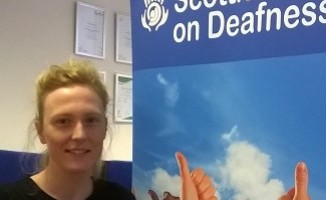 Our organisation, Scottish Council on Deafness (SCoD), is an umbrella body which supports third sector organisations who work with deaf services users across Scotland. BSL / English interpreters in Scotland number around 67 people so there’s difficulty in getting enough provision. We aim to support the deaf community in Scotland which can broadly be divided into four categories; the deaf, deafblind, deafened and hard of hearing. Although deaf people from each group will use BSL, the majority who employ it as a first language grew up in deaf families and had little to no exposure to spoken English. Many issues around communication and linguistic access are faced by the wider deaf community across all categories but the challenges faced by the deaf BSL community are tied to language and services access.

Growing up deaf in a hearing family, I was immersed in spoken English from an early age – or as immersed as you can be when you half-listen, half-lip-read your family’s chatter. I’d mix up the words for police and priest or swings and things as the lip-patterns and sounds fall into similar patterns. Like myself, not all deaf people are brought up using sign language, yet for deaf children whose parents use BSL and do not have exposure to spoken or much written English, the obstacles created by language barriers can be formidable.

When the information of every service, from healthcare to transport to education is conducted in a majority language – English – it can be easy for the deaf community to be as disadvantaged as a Glaswegian tourist wandering around a wee Western Isles village where only Gaelic is spoken. However the key difference between a deaf BSL person and a foreigner is that some amongst the deaf community are unable to access oral English. For this reason the British Sign Language (Scotland) Act 2015 is central to addressing the problems of inequality across the deaf community. By aiming to ensure equal linguistic access for deaf people who communicate through BSL, many of the barriers around communication could be broken down and opportunities in education, employment, and justice improved.

Amongst the deaf community, few people identify as disabled. The linguistic approach suggests that community empowerment can be driven by linguistic access and greater knowledge of BSL across schools, police stations, hospitals, the courts, public bodies as well as amongst the wider public. The 2010 Equality Act, which means employers must provide reasonable adjustments for employees with a physical impairment such as deafness, is a fantastic step forward yet it only covers one arena of Scottish public life. It could be argued that while reasonable adjustments are a mere sticking plaster, greater linguistic access to BSL from a young age is the cure to linguistic inequality amongst the deaf community.

As a teenager beginning classes in BSL, the first signs I learned were similar to any thirteen-year-old foreign languages student; rather than French swear words, signs for words such as laugh or idiot or simpler phrases such as bull or angry provoked much hilarity. Much like in any other language, it’s easy to make a slip of the tongue – or rather the hand – to sign ancient rather than mature when referring to a person’s age, to offend with the old signs for Chinese or Irish, for context and meaning to be lost in translation. So why should people learn BSL? Alongside driving greater equality for Scotland’s minority deaf BSL community in Scotland, learning BSL engages the mind, can protect against dementia, widens linguistic awareness and encourages communication through a visually engaging, distinct and fun form of expression.

0 0
Toby Dawson
almost 6 years ago
"...yet for deaf children whose parents use BSL and do not have exposure to spoken or much written English, the obstacles created by language barriers can be formidable."I think that the statement above is open tae misinterpretation, we have tae be careful with this kind of things as I was born intae a Deaf family, it didn't affect my ability tae learn English, it was the attitude from my teachers at a mainstream school in Dunfermline that held back my progress during my primary years.They weren't prepared tae explain the meaning of new words that I came across and I simply told that I was incorrect with the meaning of the definition of that new word that I came across, that was one of the many negative examples I experienced during my time there.I already developed speech at a very early age so the fact coming from a Deaf family didn't affect my ability tae do so.Nobody asked me on which language that I would have liked tae be taught in during my primary years, that was a right denied tae me, I eventually had a choice between Mary Hare or Donaldson's and I opted for Donaldson's tae my relief because you weren't allowed tae be taught in sign language at Mary Hare.It's a well known fact that learning sign language at an early age increases the likelihood of learning another language fluently.

0 0
Mairi Clark
almost 6 years ago
I appreciate that you want to promote BSL, and I have been trying for over a year to find a course to learn it, but to no avail. It is frustrating that skills such as these are so difficult to source, and that you actually make people work to try and find a class. That's going to put loads of people off. It would have been helpful to perhaps include some links to courses or some resource.